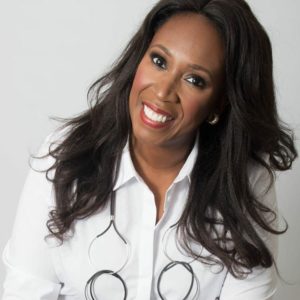 Angie Le Mar was the first female stand-up on the Black British comedy circuit. Thirty years later, she is recognised as a multi-award winning comedienne, TV and radio presenter/star, businesswoman, entrepreneur, speaker, director, producer and writer. Her autobiography Full Circle was published in 2017.

She aims to inspire young people to have the confidence to achieve their dreams, to encourage Black women to smash their goals, and to inspire everyone who has talent but needs more encouragement to ‘turn their gift around’.

Angie wasn’t diagnosed with dyslexia until after she had finished her schooling, and her memories of her school days are far from positive. She continues to struggle with dyslexia daily, when writing comedy scripts or television shows, and mainly when writing her life story.

Angie Le Mar has lived through a depression, experiencing water on the brain during pregnancy (requiring regular lumbar punctures), and the death of two of her close friends: Felix Dexter and Colette Johnson. Angie may have battled tough times, but she is, naturally, best known for making people laugh. Angie was the first Black British performer to appear at Harlem’s Apollo Theatre. She also enjoyed the first-ever sell-out show by a female Black comedy act in London’s West End.

As one of Britain’s top comediennes, Angie has successfully harnessed the power of laughter to create inspiring and thought-provoking productions. From stage to radio to TV to the written page, Angie is a proven hit with a multicultural audience – male, female, young and old alike. She is equally at home with quick-fire comedy, acutely observed character sketches and solid acting performances.

Angie’s TV appearances include the BBC’s The Real McCoy, ITV’s Loose Women and Channel 4’s Get Up, Stand Up, and she has also presented The Saturday Morning Show on Choice FM. Angie also created the all-women panel TV show Ladies Talk on Vox Africa Network.

As a sought after keynote speaker, Angie has graced the stage locally, nationally and internationally with schools, colleges and universities, business platforms, churches. An international mix of companies including UNESCO, America, Barclay Bank, Ernst & Young, Merrill Lynch, Shell, have been inspired by her words, wit and wisdom.

As an entrepreneur, Angie aims to inspire others to achieve against the odds and for two and a half years she ran the Angie Le Mar School of Expression fuelled by the desire to show young people, not just show business, but the business behind it.

Angie is a Mum of three in her early 50s and lives in London with her husband.